Some lucky riders who camped out awoke to an incredible sunrise, after a night of watching masses of shooting stars. There’s no smog and light pollution in this pristine country.

Whereas crew were awoken to pings from other not so lucky riders.

Jaco Storm (JST) was busily sending intel into Race Headquarters at the crack of dawn. The conversation went like this…

Simon Kenyon (SKE) got bucked off 3 times and dragged a bit but held on and didn’t lose his horse – instead the saddle broke. He got a spare saddle at VC6.

Navigation was quite tricky through vet checks 5, 6 and 7 with quite a few riders back tracking trying to find their way. Apparently, there was also a ‘shit tonne’ of bog by the lake so riders were getting stuck and having to go back to find a better way. 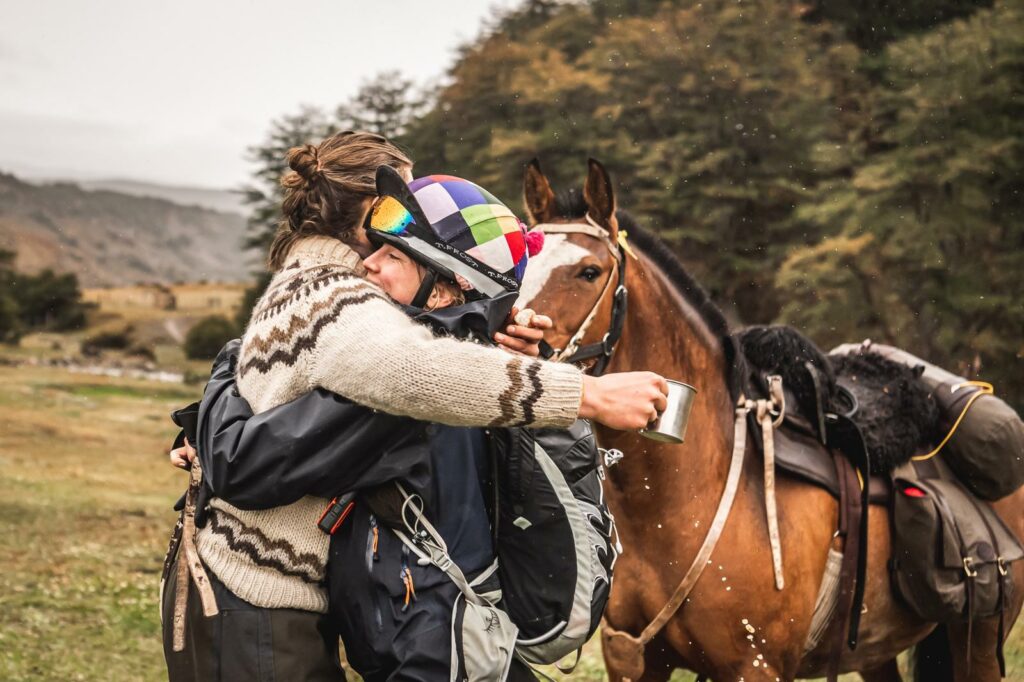 Some riders have also missed compulsory route markers and have been directed to go back by HQ. Penalties will apply to riders that don’t follow these directions. Laura Heuer (LHE) missed a route marker between VC 3 and VC4 when traversing around the lake. This was calculated to be a 5km 45min advantage so she will be sitting a 45min Technical Penalty at VC7.

Brenda Johnson (BJO) was a bit confused about where to go and messaged in asking for some help from HQ. She appeared to be riding around in circles. She was told help can be given but will be considered ‘outside assistance’ and will incur a penalty. Brenda Johnson (BJO) & Kirsteen Thain (KTH) ended up making it out on their own. Kirsteen was then speaking about coming out of some really treacherous terrain back to the grasslands: “It was like passing from Satan’s living room into the Garden of Eden. Brenda this is f^*ken crazy, what the f^*k are we doing?”

When riders left VC5 they had to make a choice as to which way to ride around Laguna Sterea – a sizeable body of water. 4 riders in the initial pack opted to go left and 6 chose to go right. 4 of the 6 riders who took the right-hand path made it into VC6 first. They were Holly Conyers (HCO), Holly Chamberlain (HCH), Rochelle Latka (RLA) and Anna Boden (ABO). Riders also needed to cross the Río Ñires which looks like quite a large river on the map.

Rochelle Latka (RLA) said she is very attached to her horse (she named him Big Red) and is going to cry when she has to say goodbye.

Meanwhile Antoine Carle (ACA) accidently left his chaps behind at one of the vet checks. We bet he is missing them!

VC6 was also the first of the 4 resupply stations, where riders could exchange their trash for an additional 2kg of supplies. It’s personal choice what they resupply with. Morgan Van Overbroek (MVO) received her first resupply bag today and was super excited to finally be eating after having 1 meal per day for 3 days. Wonder what she had initially packed instead of food? She also hasn’t slept for 2 nights as she’s been freezing so we are guessing it wasn’t extra layers! Hopefully things improve for her from here!

VC6 is also another horse change station. Anna Boden (ABO) reported: “drew no 54, thought wow! Saw him in the ring, thought wow! Tried to catch him for 5mins, thought hrmm might be difficult. 20mins later 4 gauchos help catch him, 20mins after that he’s tacked up and gone like shit on a shovel with the saddlebags, so I changed horses.”

Part of the challenge of this race is to plan your camping spots. The riders who can’t make it all the way to VC7 by 6pm have instructions on where they can and can’t camp in order to respect the agreements we have with the landowners in this part of the course.

Rochelle Latka (RLA) and Holly Chamberlain (HCH) led the way to VC7 with Holly Conyers (HCO) and Anna Boden (ABO) not far behind.

Cristóbal Ortiz (COR) was flying along trying to make up time after sitting out his 2hr vet penalty at VC5. It’s a risk if riders push too hard to catch up though, as if that horse doesn’t pulse down in time they will occur another penalty.

Carmen Jackson (CJA) and Mackenzie Stabler (MST) are riding as a team and have trained together for the last year for this. They are no stranger to mountains, snow and feisty horses.

Kade Brassington (KBR), the youngest competitor, is camping out alone tonight between VC6 and 7.

Hinke van der Werf (HVW) had a fall but was cleared by medic Ness to ride on. Hinke then became lost in the woods a few kms out from VC7. Crew member Jeremy set out to find her, however it got too dark and with the forest too dense, Hinke said she was safe and staying put until daylight where crew will assist if necessary.

Anna Boden (ABO) had a long and tricky leg on day 3. Her horse didn’t want to go in front or step over logs, a bit of a problem when trekking through 20km of forest. She got to VC7 at 5pm with the front runners Holly Conyers (HCO), Holly Chamberlain (HCH) and Rochelle Latka (RLA), who were in and out with 50 mins still to ride. They left to find water and a place to camp but were unsuccessful in finding this so they turned back, enjoying something of a circular loop before bedtime.

The temperature at VC7 was in the single digits. Cloudy, with winds a max of 45 km and no rain. A nice change from snow and sleet.

Day 3 and 4 are often some of the most challenging for riders. Moral starts to dip and fatigue sets in. Reports of swollen knees, grazed cheeks, cut fingers, genital rash and piles taking a beating. Good to see some humour is still intact.