Louise came a respectable 11th in the 2015 Mongol Derby and has been helping out on the ground since 2016, doing everything from horse selection, and hosting the blood wagon to event managing in 2019. When not on the steppes of Mongolia she trains horses in Western Australia. The launch of the 2019 Mongol Derby – Photo by Sarah Farnsworth

44 competitors from 12 different countries all met in Mongolia, a country with a long and famed history associated with the horse, to compete in the longest and toughest multi-horse race on earth. Riders attempted to ride 1000km in less than 10 days, changing horses at Urtuus (Mongolian for “Horse Station”) approximately every 35km. The race which is an ultimate test of endurance for the rider, recreates the early postal system developed by Chinggis Khan in 1224. The race isn’t recognised by the Guinness Book of World Records for nothing. 3 riders were taken out in pre training before the race even started, boasting broken ribs, a punctured lung, torn rotator cuff, fractured scapula and severe vomiting and diarrhoea. SCH gets thrown from his horse – Photo by Sarah Farnsworth

Nice weather at training camp also lulled riders into a false sense of security. On the morning of the race it began to pour with rain which continued non stop for 3 days. Riders shivered their way through some tough lessons delivered on the steppe by semi wild Mongolian horses, harsh terrain and cultural differences.

A mere 17 minutes after the race started another rider was evacuated back to the capital city, Ulaanbaatar, after her horse fell in a hole and she face planted, breaking her nose and giving herself a nasty concussion. Others were treated for hypothermia and severe chafing. 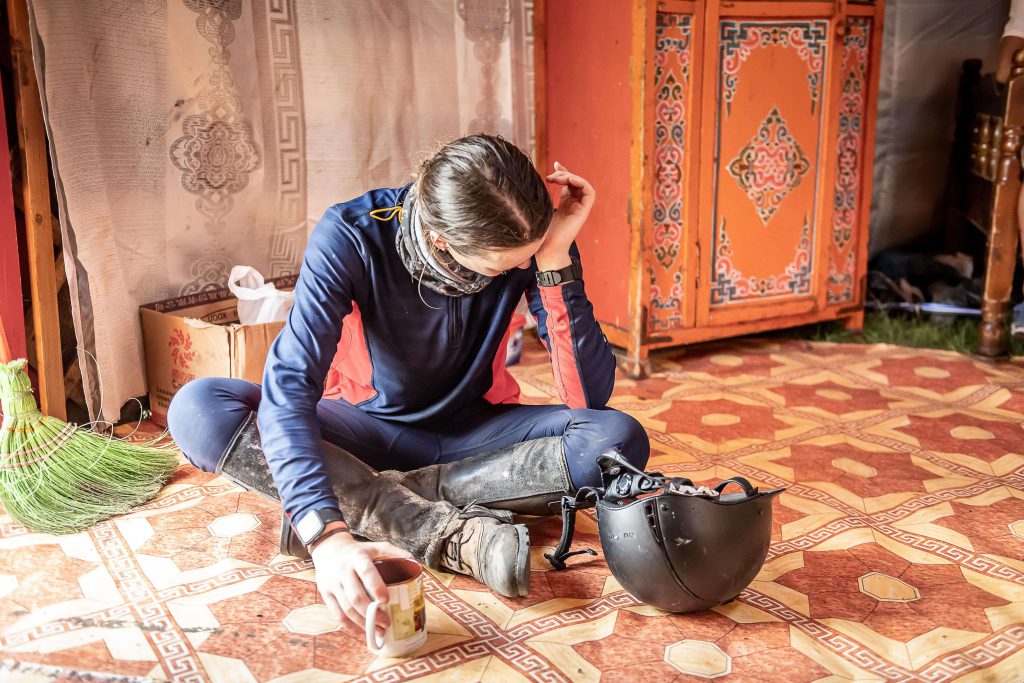 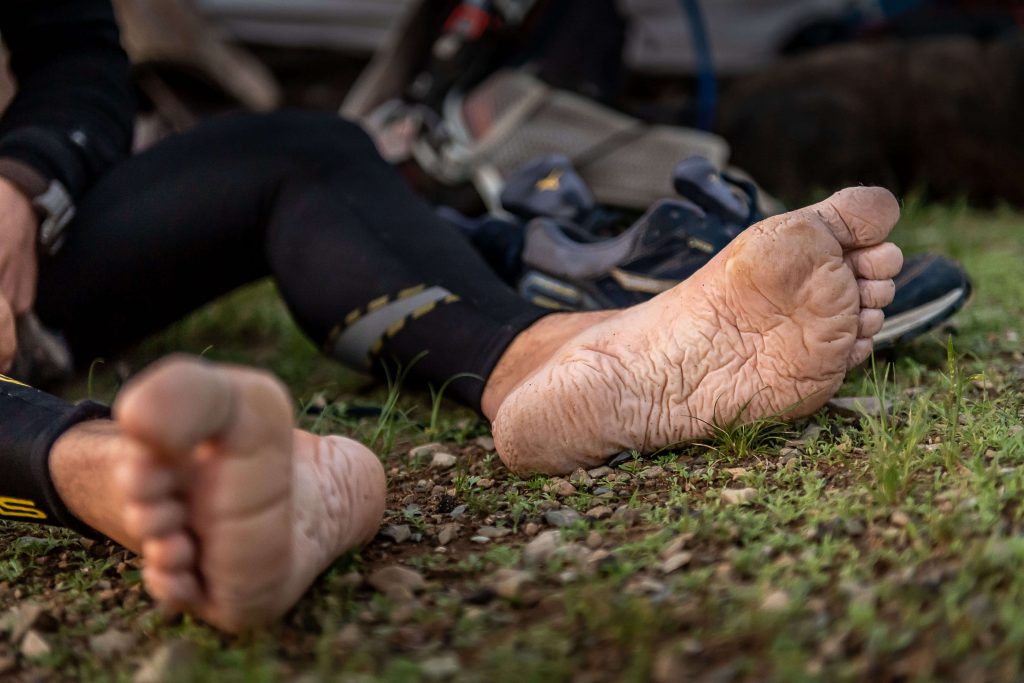 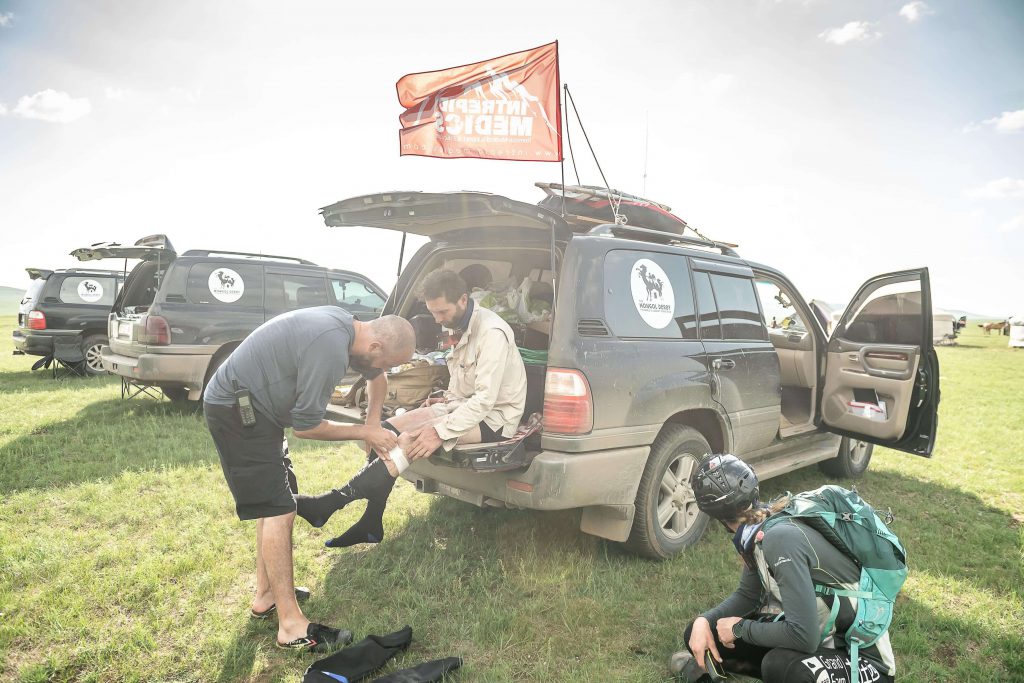 JB having his knee tended to

Some riders, unable to feel their cold, fumbling fingers and still learning how to work the GPS, were seen on the live tracking system heading way off course to what appeared to be Russia. Crews were quickly dispatched to turn them around and redirect. The weather was also taking its toll on crew, with one vehicle very much stuck in a bog. Despite eventually rescuing this vehicle a couple of days later, 3 more vehicles got stuck in the process. Mongolia is famous for its “4 seasons in one day” kind of weather and this years Mongol Derby was no exception. After all the rain, the sun finally broke through the clouds and now a new myriad of problems began. Some riders, fearful of getting off and losing their horse, didn’t take off their warmer layers and ended up with heat rash. Others didn’t drink enough water and started showing signs of heat exhaustion. One rider was evacuated, in a race against time, suffering severe from heat stroke. As another of the medics (from the UK based company Intrepid Medics – who specialise in remote medical assistance and education) – were tied up evacuating another seriously ill rider, a race hold was placed on the morning of the 6th day. Once our team of medics were back in the field, racing recommenced at 10am. AW undeterred by the bad weather – Photo by Ian Haggerty

Being that it is the Mongol Derby, a race not only requiring requiring skill, mental fortitude and physical toughness, it’s also a race that requires a good deal of luck. One rider seemed to be showing all 4 of these attributes and was starting to gain a clear lead. That rider was none other than 70 year old Robert (Bob) Long from Idaho. Excitement and anticipation was running high among those following along on social media all around the world. Could Bob sustain his lead to become the oldest ever winner of the Mongol Derby? Riders are able to stay at the Urtuus where the local herder family’s are responsible for taking care of their horse overnight. The other option which is discouraged due to the risks, but is still an option, is to camp out overnight with local nomadic families. Riders are then responsible for their own horse ensuring it has water and adequate grazing. Will your horse even be there in the morning? Who knows? Bob Long only stayed one night at an Urtuu. The rest of the time he stayed with families, forming bonds through means other than language. Word on the steppe travels fast and he was soon gaining a reputation as an amazing horsemen and a likeable character. Herders were so taken with Bob that when he crossed the finish line in first place, after a 7 day, 4 hour and 33 minute adventure, they gifted him a horse. When asked what it felt like to be the oldest winner of the Mongol Derby, Bob replied “Age is just a number – preparation trumps youth”. In the end only 27 riders (61%) completed the 2019 Mongol Derby. Some came back into the field after a stint in hospital to continue in the non-competitive adventure category – riding where they were able. Many more retired.

If you think you have what it takes to ride the worlds longest, toughest horse race, you can find more details and sign up here. The 2020 race is already full, but applications are already open for 2021.