August Mongol Derby Day 3: It ain’t over till it’s over

August Mongol Derby Day 3: It ain’t over till it’s over

Day 3 of the Derby forced us to ditch everything we thought was a certainty when we shut the lights out on Day 2. At close of play yesterday the mighty Viking Olof OSU was sitting pretty, camped between HS6 – HS7 and while his lead was not substantial enough to completely disregard the chasing pack, it should have been sufficient to propel him to the next station and beyond with a bit of breathing space. However, the HQ switchboard sprang to life at 05:45 with this grim message from OSU relaying those fateful words: “Lost horse. I’ll go searching.”

Oh, the camping conundrum. As every Derby rider knows, camping is as much part of the Derby as chafed thighs or smelly socks and way more fun. But it comes with the risk that when you crack an eye open at 05:00 your horse might have hobble-hopped its way off to greener pastures, leaving you with a bewildered expression on your face, clutching an empty saddle.

OSU wasn’t the only unlucky horse-less rider bright and early on Day 3, with ABE Abbi and EOU Erdene out at first light searching for their elusive mounts that had buggered off somewhere near Ugii Lake. This dynamic duo who paired up yesterday put their heads together to make a plan: EOU off with a herder to scour the countryside, ABE on the ground assembling their gear and getting ready for the off in the optimistic chance that their horses were returned. 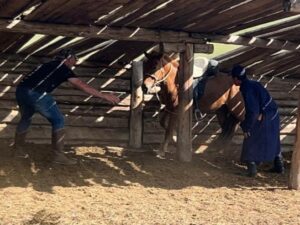 This turnabout à la lost horses first thing in the morning changed things up with the positioning on the board. A lost horse situation provides riders with a few choices in the event said horse is not recovered in time to carry on. They may catch a ride back to the previous horse station and ride out from there penalty free; they may walk forward to the next station penalty free; or they can catch a ride forward and sit a two-hour penalty from the time they arrive. HQ presented these options to the still-horseless OSU who had searched for nearly two hours to no avail; but while we had dispatched our own herder to scan the countryside and offer OSU a ride forward he beat us to the punch, thumbing a ride to HS7 in a Steppe Uber late-model Toyota. He arrived at 09:32 just ahead of the chasing pack who were now breathing down his neck. “No horse. Taking 2hr penalty. This is getting exciting” he wrote. But more excitement was yet to come… 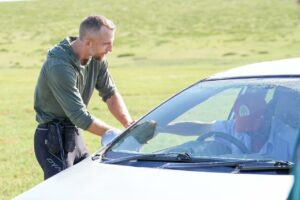 Further down the line, the mid- and back-fielders were having their own rock ‘em sock ‘em kind of day with a few unscheduled dismounts and semi face plants. This bunch is pretty hard-core though with nary a complaint coming in, and we saw some cracking good riding with a number of them climbing up the leaderboard by the end of the day. HDM Hugh of the former lost-horse fame smashed 3.5 legs to finally catch his brother BDA Ben at HS9 where they overnighted. 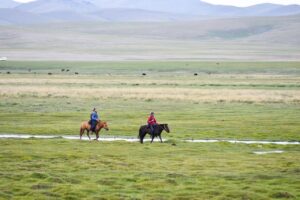 The Derby gold standard is 3 or more horse stations per day. This is no small feat as each leg is approximately 35 kilometers give or take the length of a camel or two so we’re talking 105 km/day and up. Day 3 saw the majority of the field putting in the miles, with HMC (the other Hugh), EOU, JDP, dynamic duo MKE & AKE, ABE, BHO, CKI, CFE, HDA, MDO, RLA, RTI, SMI, TLA, VWA, WEV and BBE each kicking down the door with 3.5 legs; and ADO, SBU, ELE, ALE, CRA, KMA, AMU, AMC, BDA, KCA, MJO, SJO, ZGE and SCA all breaking free with three legs each by the end of Day 3. 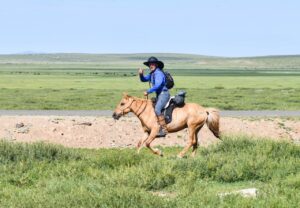 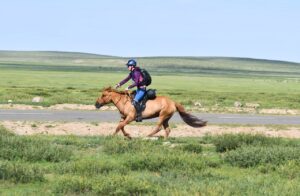 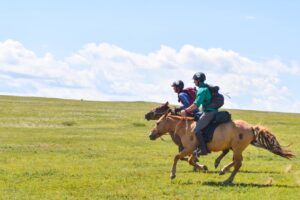 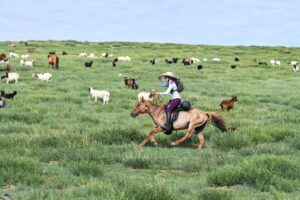 This is not to diminish the accomplishments of the back field, which is where, as we say with great fondness in HQ, “all the sh#t goes down.” These hardy chaps are the ones who have suffered lost horses, lost tack, bad luck, bad breaks and still keep on ticking. Hats off to these folks – if you see someone at the back of the pack on the leaderboard just remember that they have probably ridden a tough few legs with tack from the lost-and-found or have walked around half a day on the steppe looking for a horse. 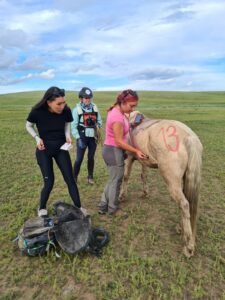 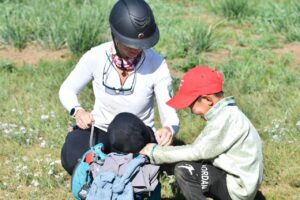 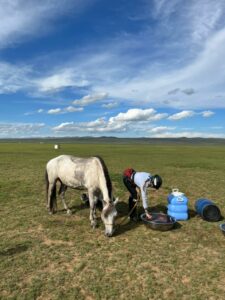 On Day 3 the back field pulled up their worn and shredded tights and half-chaps to close out the day either at HS7 or between HS7 – HS8. AGU Alice and KMA Kate riding as a team off the start line found themselves separated by some bad luck when AGU’s horse politely declined to carry her further than mid-way between HS5 – HS6. The intrepid AGU gave chase on foot, cornered the beastie with some mares in a corral, and with the help of a couple herders, remounted and walked the dejected escapee into the next station. Now back with her horse but sans her teammate, she had these chivalrous words for her teammate KMA: “I hope Kate is going on to ride her best race.”

Up at the pointy end of the race it was a story in the making as the chasing pack of riders blasted into HS7 where OSU was cooling his already cold feet for the mandatory two hour carry forward penalty. HDA Helen and ZGE Zoe were in and out of HS7 in the flash of a yak’s tail with CKI MKE RLA AKE RTI and VWA not far behind. Penalty finally over at 11:25, OSU was hot on their heels with a splendid mount, narrowing the gap to only 6km as ZGE leading the front runners came into HS8. We waited with bated breath to see who would be first out of HS8: ZGE? HDA? CKI? 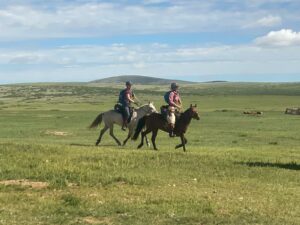 As the minutes ticked by with no movement out of HS9 HQ began to suspect something penalty-wise was up. Vet Lucia pinged over the news that no rider wants to get: ZGE had landed with a 2-hour vet penalty and OSU his second vet penalty (which costs a rider 3 hours of precious riding time.) Ouch! The lead had changed yet again! 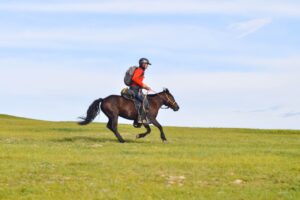 HDA was the first rider out of HS9 with 4 hours left to ride with CKI not far behind, and these two kept pace for the balance of the day. These ladies are showing some impeccable riding. Vet Anna at HS9 was chuffed to report that CKI soared through the vetting with a 50 heartrate and a clean vet card – something to be very proud of. 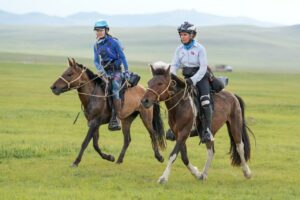 At the close of business on Day 3 the lead pack were camped out in small groups between HS9 – HS10. Who will be first into HS10? Will OSU put his head down and blast back to the front of the pack? What about local favourite BBE who has steadily fought his way back towards the front from a less-than-stellar Day 1?

We don’t know the answer to these questions so will distract you with with these epic images: 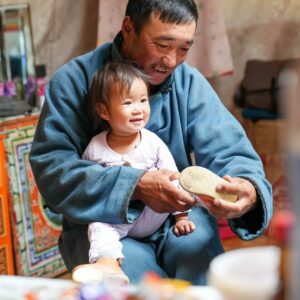 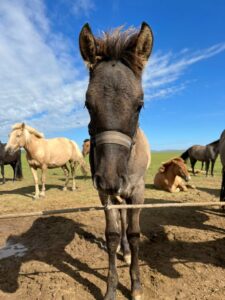 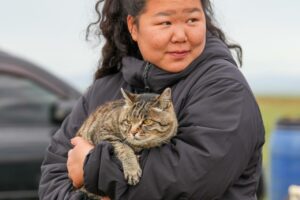 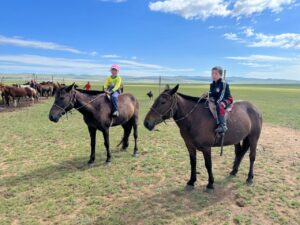 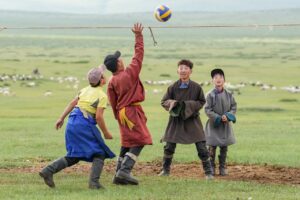 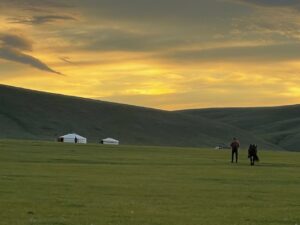 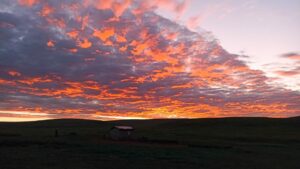